France's halal meat - is it the real thing?

France's halal meat - is it the real thing? 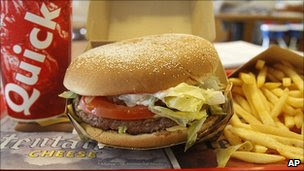 Quick is expanding the number of all-halal outlets. There is no suggestion Quick halal is not genuine
The French market for halal food is expanding rapidly, giving rise to a number of issues - not least, how do we know it's halal?
This week the fast food chain Quick - the number two burger chain in France after McDonald's - announced that 22 of its outlets would serve halal meat only.

It has been trying out the idea at eight restaurants for the past nine months, prompting criticism from some politicians and intellectuals concerned that the secular values of the French Republic are being betrayed.
Halal food is big business in France, and is growing fast. With the largest Muslim population in Europe at about six million, France's halal market it is already reckoned to be worth 5.5bn euros (£4.5bn) - twice the size of that for organic food.

While the burgers served at Quick are genuinely halal, experts have doubts about much of what is sold elsewhere.
Rachid Bakhalq, the owner of a halal supermarket in Nanterre, a suburb to the north of Paris, says the market is swamped with bogus products.


He told me "80% - most of the halal products based on meat - are not halal at all."
Asked what evidence he had, he said that, at the wholesale market he attends outside Paris, "there are people there ready to stamp whatever you want halal simply because they want to have money and they take 15 cents per kilo simply to stamp whatever product you want to be stamped halal."
This claim seems to be generally accepted by many Muslims.

Imperfect system
Abbas Bendali, a marketing expert who specialises in ethnic and minority products, says the problem is that there are too many different organisations involved in certifying that products are halal.
"In France today, there are nearly 50 different organisations which certify that meat is halal," he told me.
"It's logical that for a market which will be worth 5.5bn euros in 2010, there should be a single certification. That's what the consumers want and it's what the industry wants."

Officials at several mosques in Paris said that with limited resources and different organisations involved, it was difficult to make sure that there were qualified personnel on site all the time to monitor that all animals were being slaughtered in accordance with strict Islamic dietary laws.
According to Muslim tradition, animals must be killed by having their throats cut, and all the blood must be allowed to drain out.

Kamel Kabtane, rector of a large mosque in Lyon, and in charge of the halal question at the French Muslim Council, told Le Parisien newspaper that checks are not strict enough for 40-50% of products sold as halal in France.
The council wants to introduce a national charter to be signed by all mosques and organisations involved in certifying halal meat.

Secular fears
Another development which could change the current situation is the entry of the large food companies into the halal market.
There is no suggestion that any of Quick's products are not genuinely halal - and Quick is only one example of a large food company which is waking up to the potential of the halal market.
Over the past three years, many big food manufacturers have started introducing halal products, and they know that they cannot afford to get it wrong.

Halal supermarkets have a piece of the growing Muslim market
Mr Bendali says surveys carried out by his company, Solis, indicate that 90% of consumers of halal products are concerned about certification, which is a main factor in their decision to buy a product.
"Under pressure from the large food manufacturers and the distributors, we'll certainly move towards a single certification," he said.

I spoke to about 20 Muslims who were buying food for the evening meal to break the Ramadan fast in and around Paris, and not a single person was surprised by the claim that many halal products are in fact not halal at all.

One woman suggested that there should be European standards to cover halal, which would apply in all countries of the European Union.

And several people I spoke to said those involved in certification should face penalties or legal proceedings if it was proved that they had failed to follow the correct procedures.

But France is not used to catering for minorities as large as its Muslim community.
When Quick began serving Halal burgers nine months ago, there was an outcry.
Many French people are anxious about what some see as an increasingly assertive Muslim population.
The country has been through an uncomfortable debate on national identity launched by the government last year, and is on the verge of banning the Muslim face-veil in public.

One man I spoke to outside a Quick outlet told me that the secular values of the French republic would be undermined if there were restaurants serving only halal food.

"What we want to avoid in France is any attempt to impose the customs of any particular community," he said.
"It's dangerous to have separate restaurants where you eat halal, kosher or pork. They should offer a choice for everyone, because this kind of separation between communities sets people against each other."
But when I put that argument to Muslims, they pointed out that it is impractical to serve halal and non-halal food in the same restaurant, and kosher restaurants have existed in France for a long time without attracting this sort of controversy.